A Year in Chicken Soup 1 - Avgolemono

As soon as I announce my plans to cook a different incarnation of the classic comfort food every month for a year, the Chicken Soup Conflict erupts. “My grandmother's Jewish penicillin is THE best!!!” emails a vague acquaintance. “Mexican chicken soup! Which other country actively encourages you to take both chocolate and tequila with your cure?” texts a friend.

As the petitions roll in, I realise that strict diplomatic conventions will have to be adhered to, if we are to avoid an international incident. So the club’s first rule is instituted: a strict and literal, ‘first come, first served’ policy.  Since the fastest and, well... most insistent vote comes from a friend trumpeting the magical powers of her mother's Greek version, the main dish for our first Comfort Food Café session is decided: Greek Avgolemono. 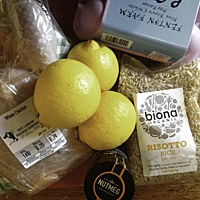 Its name derives from the two ingredients that distinguish it from the sea of chicken soup recipes: avgo (egg) and lemoni (lemon).Apparently, the dish is so inherent to Greek culture that its recipe can be traced back to the days of Alexander the Great. Really, though, Avgolemono belongs to women. It's the Yia Yias, or grandmothers, across the 227 inhabited islands of Greece who have preserved their family recipes against the forces of time and migration, preparing it for the pale and pasty for thousands of years with a matriarchal insistance that brooks no argument and no alternations.

All of which presents a problem to me. You can find countless Avgolemono recipes online, but these aren’t the kind I was after. The real Avgolemono - the authentic kind that, I am promised, can cure all ills from heartbreak to flu - doesn’t have a recipe as such to follow. These dishes aren’t written down, but passed down through the generations by a more kinaesthetic process of nattering, splattering, slurping and smelling.

Here, however, is where I strike gold. Because after a little pleading, and the initial insistence that there is no recipe, you just “throw things in”, the Greek mother of an old friend agrees to scribble down her own family version. So I finally have a recipe, if a little vague, and I can get to work.

Xanthe grew up in Thessalonkiki, Greece. She won a scholarship to study in the States, then returned to Greece where she met an Englishman. Presuming the UK was a similar place to the US, she agreed to marry him, then got the shock of her life when she moved to 1979 London. As a diplomat’s wife she’s since lived all over the world, but this is the recipe she always returns to when she is under the weather...

- Cook rice in broth for half an hour
- Lower temperature to 1 or 2 when rice is cooked
- In a bowl beat the eggs- Squeeze one or two lemons, depending on how sour you like your food
- Then, with a ladle, spoon the hot/boiling broth slowly into the egg mixture beating continuously. Make sure you do this one step at a time, otherwise the egg mixture will curdle. Keep adding alternatively the lemon and the hot broth into the bowl
- When you think the temperature is about the same in both the bowl and the broth, empty the egg mixture into the pot, stir and lower the temperature.
- Make sure the soup does not boil after this point, otherwise it will curdle.
- Season, add chopped parsley and add more lemon if you like or pieces of boiled chicken for a more substantial meal

Xanthe says: This is a wintry recipe and very common during the cold months of the year or when people feel unwell.  Unfortunately, I have always associated this soup with being ill.  It is light and nutritious.

Armed with the recipe, I post a message on Facebook advertising the inaugural session of the Comfort Food Café and inviting anyone with an ill that needs addressing  - be it homesickness, morning sickness, man flu or a hangover - to sign up.

The first to reply, and to make it onto the panel putting Avgolemono to the test, are:

Sappho, whose mother Xanthe’s recipe we were cooking
Simon her English fiancé (to whom she is getting married, in Greece, in the summer)
Asimina, a Greek expat and photographer who is currently pregnant with her first child
Harriet, a newspaper editor and the 'control' in this experiment, being the only one without Greek links and therefore relatively unbiased.
Harriet's boyfriend Dre, who ends up taking part remotely, from his sick bed, with a genuine case of man flu - we send Harriet home with a pot for him, to test it's curative properties.

Oh and me and my husband, Tom. 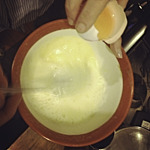 “Be careful you don’t split the eggs!!!!” read the Facebook message I received on the day of the supper, not doing a great deal to calm my nerves. That is, seemingly, The Big Thing with avgolemono: split the eggs and you endanger both the soup itself and your credibility as cook.

Luckily, both Sappho and Asimina arrive early (or rather, I am running late) and began to bustle around the kitchen, taking charge of implements and (since all Greek families have different methods and all Greek women are... powerful) debating the procedure.

“My family follows a similar recipe, but we also add veggies, like celery, carrots, onions, potatoes and parsley,” explained Asimina who, as both a vegetarian and pregnant person who therefore couldn’t risk the raw egg involved, was relegated to eating the feta, bread and lentil stew side dishes.

“But just the smell is taking me back to my mum’s kitchen,” she says. “As a child I loved looking at her cooking and chatting. It was a good way to avoid doing my homework: I got away with it because she had company in the kitchen while I was there. I’m also a visual type, so I remember a lot of recipes from the way I saw her make them, rather than by reading a recipe. It’s made me an 'anarchist' in the kitchen - I visualise my food and start making it with whatever ingredients I have instead of reading a recipe in a book and follow it step by step.”

How does the smell make her feel, now that she’s so far from the place she grew up? Homesick, or comforted? Both, she says, because it’s so completely bound up in her memories of home, her sense of who she is and where she comes from. 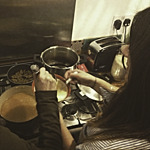 “I think it was particularly important for my mum to cook it when we were growing up,” agrees Sappho, alternating ladles of broth, lemon and egg, “to connect us all to our Greek heritage. Especially because we were often posted abroad when I was little, she’d make it when she just wanted a taste of 'home.'”

“Wherever we were in the world, mum would still make us avgolemono if we felt poorly because the ingredients were so readily available. Now, though, it’s Simon who cooks it for me when I’m not well, because I’m pretty crap at it!”

For Simon, learning to make avgolemono is about more than curing a common cold, though. Cooking the iconic recipe himself, bringing it to life, is like opening a portal into his fiance’s culture and history, a way to share in something from which, as a Brit who grew up in Cumbria, he is otherwise excluded. “Learning these recipes feels like a good way of connecting to Sappho’s family and heritage,” he explains.

Pouring the finished egg and lemon mix into the main soup, Asimina agrees. Once born and weaning, her daughter will be fed traditional Greek dishes like avgolemono so that she feels a sense of belonging to her Greek heritage, even if she’s raised far away in the urban streets of North London. 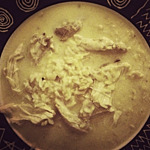 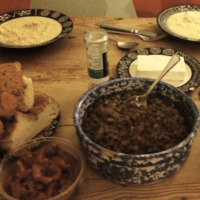 Soup finally plated up, we sit down to a supper of Greek lentil stew, feta cheese, olives, bread, wine and the main event: a fragrant, light cream with soft shredded chicken pieces and glutinous rice. Asimina puts an extra bowl of lemon juice out because, she says, “Greeks have lemon with everything.”

It is, by unanimous vote, delicious. An incredible alchemy of tart lemon, rich egg, salty broth and sweet rice. Because of the dynamic between sharp lemon and comforting stock, it’s one minute soporific and the next envigorating.  It is, Harriet says, “like a big comforting, silky, velvety, lemon chicken hug. Definitely extremely comforting, despite not being Greek.” She’d definitely make it next time anyone is ill, she says.

So to me, to Tom and to Harriet, it tastes of travel and - because of chicken soup’s global reputation - of comfort too. To Sappho and to Asimina, it tastes of home, family, and heritage, and to all three – Asimina, Sappho and Simon - it also tastes of future family and new life.

But does it cure a cold? We send a pot back to Dre who, at 11am the following day, reports back that he’s been unable to wait any longer, has eaten the soup, found it delicious and is feeling better. I, on the other hand, come down with flu on the very same day. So... the search for the perfect chicken soup penicillin continues.

Here is the recipe as a PDF.

In the next article, we’ll be crossing culinary continents (sadly from within the geographical confines of a small, suburban kitchen) to test a new chicken soup. Get in touch with suggestions of all sorts via Twitter: @hattiegarlick

A Year in Chicken Soup

Other Articles by Hattie Garlick