I fondly remember Beajolais Nouveau Day being a huge event in the UK, particularly London. Enthusiasts would be at the wine producers' and merchants' doors for the 00:01 release, ready to rush cases back to the UK and be the first to have the wines available for consumption on the same day in bars and restaurants. It was a particularly popular institution within London's financial square mile, where bankers and traders would breakfast on bottles of the wine before work. Those days have long gone but it is still seen as something to look forward to over dinner on the same day as release.

Apart from the fun of the challenge to be first to experience the year's wine, there is a very important aspect to what the quality of Beaujolais Nouveaux tells the world about French wines for the year. The wines give us a good insight to how the year's vintages for many wines across France will be once they have had time to mature. So, after such a difficult year for everyone due to Covid 19, what are the locals in France saying about this year's vintage?

"2020 is really a super-vintage, we harvested early, the tannins are concentrated, it's a wine that we can keep,"

"We have something very fruity. The summer sun has allowed us to produce a product of very beautiful quality this year that will reconcile everyone within Beaujolais,"

With what the locals are saying, let me take you through my experiences of 6 different bottles. 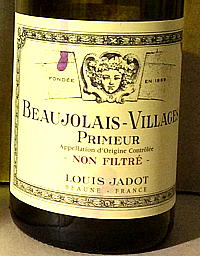 The first is from internationally known Louis Jadot who is a producer-wine merchant based in Beaune. The first taste is dark berry fruits and tannins. After an hour the tannins soften and the wine is well balanced. It has a good big flavours and and depth which is not normally found with the Nouveau wines. I drank mine with a goats cheese and the pairing was excellent. The wine would also pair well with cured meats and smoked fish, To really enjoy this wine, open it an hour before your first glass. It is then a drink to enjoy on its own without food.

The bottle was bought from a wine merchant. You should be able to buy it for £10 to £12. 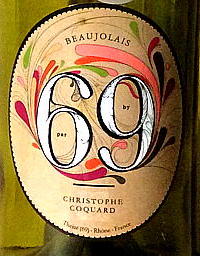 Like the previous wine, the first taste is dark berry fruits and tannins, The tannins fade very quickly. After 30 minutes the wine has hints of the “banana chew” flavour which Beaujolais Nouveau has been known for over the years. I ate a garlic and truffle gouda cheese with the wine and it paired very well. You can pair it with most cheeses, except blue, smoked fish and cured meats. It will work with less fatty roast meats like pork and turkey breast.

The bottle was bought from a supermarket for a little under £5. 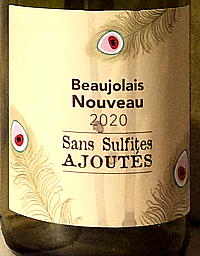 The wine was bottled by a wine merchant for a supermarket chain. It was made without using sulphites. The first taste is big red berry fruits and no tannin. This does not change over time. I did not pair this wine with food. It is a simple wine to enjoy on its own or as an aperitif.

The supermarket sells it for under £5. 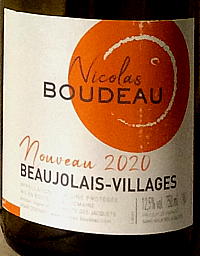 This wine from an Artisan-Vigneron Nicolas Boudeau is also made without the use of sulphates. However, it is a totally different tasting wine to the previous one. The dark berry fruit flavours are well balanced with tannins. This is a big and well rounded wine with some complexity. Works well with big flavoured dishes or on its own. I enjoyed my glass (or 2) with an unctuous beef casserole. A great wine which is worth hunting down.

Bought from a small wine merchant for £10. 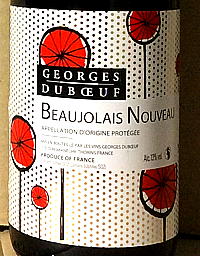 Another internationally known wine producer. After opening the bottle I took a sip. The big red dark berry flavour was balanced with an equally big spice flavour that immediately hit the back of my throat. Wow, this is another wine which packs a punch. I then left the bottle for an hour before taking my first proper glass. Now the the big dark fruit flavour was working in perfect harmony with the spice. With the wine I enjoyed a hot chilli and rice dish. The pairing was excellent. This wine would will go well with other big flavoured and spicy food. It will also work well with a mature tangy cheese such as cheddar.

Bought from a supermarket, available in the £8–10 price range and well worth the investment. 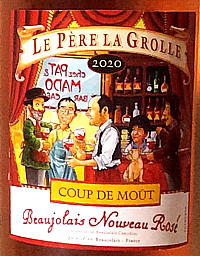 When I saw this rose I had to buy it. Never before have I drunk Beaujolais Nouveau Rose. Not by choice. Just never seen it on the UK shelves before. However, it is widely available in France. It is a light wine with soft tannins. A pleasant enough refreshing drink, but not one that I will eagerly seek out in the future.

Bought from a supermarket for under £4.

After tasting the 6 bottles, I am pleased to confirm that 2020 looks to be a superb vintage for French wines. So, pop out (if you can) and get some bottles to try for yourself. Let me know what you think.

I hope this first trip down The Drinks Aisle has been informative and entertaining for you. Next month I will pick some bottles from another part of the Aisle and give you my input as to what I have found.