Part 8, is dedicated to turtle soup. Helen starts with the famous poem from Alice in Wonderland followed by an extract from Pentimento by Lillian Hellman. She continues with recipes for both Mock Turtle Soup and real Turtle Soup from The Joy of Cooking by Irma S. Rombauer, and for Consommé Fausse Tortue from Kitchen Essays by Agnes Jekyll. 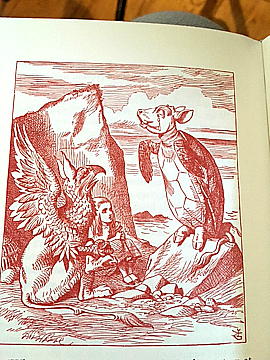 Alice encounters a Mock Turtle and a Gryphon, who persuades the former to sing them a song.

“The Mock Turtle sighed deeply and began, in a voice sometimes choked with sobs, to sing this:

But first you must catch and kill your turtle. 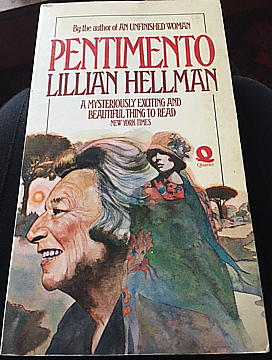 Hellman was living with Dashiell Hammett in Martha’s vineyard. They had a cook who made great chowder, so she would go out on her boat to fish for flounder and tautogs ( a type of wrasse). Writing her memoirs, she recalls how

“… I once knew a lot about trees, birds, wildflowers, vegetables and some animals; about how to make butter and cheese and sausage; how to get the muddy taste out of large- mouth bass, how to make people sick with the weeds I would dig and boil up according to all those books that say you can.”

One day she took Salud, her large poodle out for a walk to a lake. All of a sudden he appeared to be paralysed with fear. She saw a large turtle. The turtle bit the dog’s leg and hurt it badly. Hellman remembers that, when she was a child in New Orleans, there were two butchers in the local market who had no thumbs. They had been taken off by snapping turtles. She had Hammett do research and they set off, armed with wire cages, giant fish hooks and bait, which they attach to branches overhanging the lake. They caught a large turtle, dragged it to land and then attached it to the bumper of their car and drove home with it. It takes ages to kill. Hammett stands with an axe poised and Hellman waves a branch in front of it, to try to tempt it to dart its head out but when it does, it moves to quickly that he can’t connect. Finally he tempts it out with a piece of meat , shoots it behind the eye and then wields the axe, severing the head, that remains attached to the body by a thin flap of skin. He hauls it into the kitchen and they retire for the night, planning to make soup the following day. The next day it has disappeared. They follow a trail of blood down the steps, across the garden, to the orchard, where Salud and three puppies are staring into a bush. Inside the bush is the turtle, its head hanging to its neck by a thread. The dogs appear to finish it off and Hammett and Hellman haul it back into the kitchen. They separate one of the legs from the shell , to the disapproval of their cook, who refuses to have anything to do with it. She tells them,

“You know very well that I help with the butchering of animals here and don’t like talk about how distasteful killing is by people who are willing to eat what is killed for them. But this is different. This is something else. We shouldn’t touch it. It has earned its life.”

They didn’t know what to do. Hellman ’phoned the NY Zoological Society for advice. The person she speaks to her tells her that they’ve caught a Chelydra serpentine, a particularly ferocious foe to meet on land, with a bite that can be too swift to be seen by the human eye. He asks her to “Please put its heart in a small amount of salted water and be kind enough to send us a note reporting how long the heart beats. Our records show about ten hours.”

Horrified, Hellman asks, “Then it isn’t dead?” It’s explained to her that “the snapping turtle is a very low, possibly the very lowest form of life.” The person on the other end of the line is unwilling, or unable to tell her whether it is actually dead.

Hellman decides that she can’t proceed any further with the dismemberment and gives up all thoughts of turtle soup. She digs a deep hole and buries it.

The Joy of Cooking by Irma S. Rombauer 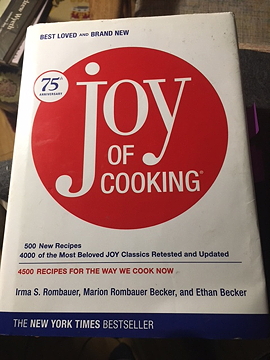 The Joy of Cooking has recipes for both mock and genuine turtle soup. Frankly I’m not sure that either are worth the effort, even if real turtle, canned or frozen, is available in the UK.

Add to the stock with

Bring to the boil and simmer for 15 minutes, skimming the scum as before. Meanwhile remove 1 cup of stock and let it cool, then add 6 tablespoonfuls of browned flour (made by slowly heating flour) and stir into the soup, reheat for 5 minutes and add 2 thinly sliced lemons and 3 sliced boiled eggs.

Cook until soft, then add
• 4 cups beef or veal stock

Bring to the boil and simmer for 25 minutes. Make a roux with ¼ cup butter and ¼ cup flour and cook until brown, then gradually whisk into the soup and simmer for another 20 minutes. Add
• 1 ½ cups chopped tomatoes
• ¾ cup dry sherry
• 1 tablespoon hot pepper sauce
• juice ½ lemon

Simmer for 10 minutes, season and garnish with watercress and hard boiled egg. 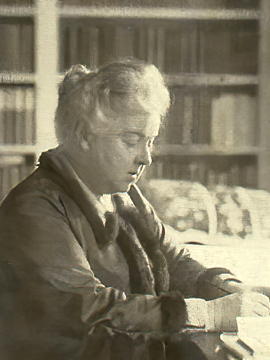 Finally and of course as you will have guessed, if you’ve read earlier entries from me, Agnes Jekyll’s Kitchen Essays contains a recipe for mock turtle soup, or rather, if you don’t mind, Consommé Fausse Tortue.

“Having removed the brains from half a calf’s head, put it in a stewpan with a little salt and water to cover, and bring it to the boil, then place it under cold water tap and thoroughly wash. Put it back into the clean stewpan with enough stock or water to cover it, plenty of stock vegetables, also bay leaf, and a few allspice. Simmer gently for five hours, then strain and leave to set. Next day remove fat, and clarify, adding a turtle tablet and some turtle soup herbs as sold at Stores. When clear, strain through a clean cloth, re boil, add a little sherry, salt, pepper, to taste and, just before serving, some pieces of the meat cut into gelatinous squares from the head and indistinguishable from green fat, two for each portion, of which there might be eight.”

I’m afraid I have no idea what turtle tablet is but it’s interesting to see that there was a time when mock turtle soup was so common that they could be had in any Store, certainly the Army and Navy Stores I imagine. I’ve done a quick Google search and variants seem to be available in oriental food stores, but I’ve no idea if they are the same. It all seems like an enormous amount of effort but Agnes assures us that

“Elderly aldermen will bless you for it, and the hunters home from the hill will forget the rigours of the chase, and be warmed and comforted.”

Furthermore, so beguiling and seductive is this soup that she concludes with the priceless advice that

“This would be a propitious moment for asking some favour, dropping out casually a regrettable piece of news, or even confessing to the near advent of an unwelcome visitor.”