In Part 4, Helen introduces us to Cooking With Fernet Branca by James Hamilton Paterson and The Sea, The Sea by Iris Murdoch. 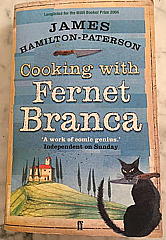 An old friend introduced me to this wonderful writer and to this book, which contains some truly shocking spoof recipes. Gerald Samper is a writer who has bought a house in Italy. He wants to be a great writer but lives by producing ghost autobiographies for one-dimensional sports personalities. The house next door is bought by the formidable Marta, who was born in a former Soviet-block country and who is a composer. Gerald has a stroke of good luck, when he is hired by a member of a boy band, as does Marta, when she is contracted by a world famous director, to write the score for a film that is being shot locally. The story of the developing relationship between Gerald and Marta and the supporting characters, including the rock star, the film director and Marta’s mafia family is a brilliant black, camp comedy.

Gerald reminded me rather of Charles Arrowby in Iris Murdoch’s The Sea the Sea. Both are to my mind, loathsome characters, dishonest and monumentally self-centred and manipulative, and they both fancy themselves as innovative cooks. Gerald takes their shared traits to diabolical heights however and here are just two of his many recipes.

Lamphreys in Sherry. Ingredients; 1 kg of live young lampreys (not over a foot long), 500 gms shallots, 1 bottle of sherry. The lampreys are brought to the boil in the sherry:

"Not too much sympathy should be expended on the lamphreys who succumb in a manner to which countless humans aspire, from acute alcohol poisoning. Blissfully drunk in other words. Then they need to be kept in the sherry for twelve hours in a cool pantry so that the flavours of the liquor can profuse their flesh from inside and out. But there were no river lamphreys to be had in Viareggio so I was reduced to buying some small eels and a bottle of vin santo.

Can I be bothered to tell you all about the sorrel, water cress, tarragon, parsley, white nettle and rosemary necessary to the preparation of this zesty dish? And exactly what to do with the two eggs and celery stick? I don’t believe I can."

This is one of his more benign dishes. His most terrifying is probably Alien Pie. The name derives from a deranged conversation Gerald has with his rock star client, who believes in alien visitation and decides to use it to re name his band. These are the ingredients:

The paraffin, he claims,

“transforms the dish from merely very interesting into an unblushing classic”

not dissimilar from the judicious use of chocolate in Mexican cookery. The dish takes days to prepare and to assemble . Eventually it is surrendered to the oven.

“Beyond this point we enter the realm of the sacramental and words all but fail me. All I can say is that Alien Pie, hot from the oven and with a jaunty buzzard feather stick in the top, should be eaten on a terrace overlooking a distant ocean above which the remnants of sunset brood like old wounds seeping though a field dressing. It is one of those experiences poised exquisitely between sorrow and oblivion.”

The Sea, The Sea, by Iris Murdoch

Charles Arrowby is far more conventional but his descriptions of the food he prepares, also for his solitary consumption are delivered with the same pomposity and something of the same eccentricity. His theory of cooking is that everything should be capable of being prepared in no more than four minutes and he contemplates writing the Charles Arrowby Four Minute Cookbook. He scorns and rejects fine wine.

“Why wantonly destroy one’s palate for cheap wine (And by that I do not of course mean the brew that tastes of bananas) One of the secrets of a happy life is continuous small treats, and if some of these can be inexpensive and quickly procured so much the better.”

I imagine most of us are with him so far.

“For lunch, I may say, I ate and greatly enjoyed the following: anchovy paste on hot buttered toast, then baked beans and kidney beans with chopped celery, tomatoes, lemon juice and olive oil (Really good olive oil is essential, the kind with taste, I have brought a supply from London) . Green peppers would have been a happy addition only the village shop (about two miles pleasant walk) could not provide them.( no one delivers to far-off Shruff End, so I fetch everything, including milk, from the village) Then bananas and cream with white sugar (Bananas should be cut, never mashed, and the cream should be thin. Then hard water biscuits with New Zealand butter and Wensleydale cheese. Of course I never touch foreign cheeses.”

So far so not too bad at all. And again:

“For lunch I ate the kipper fillets rapidly unfrozen in boiling water (the sun had done most of the work), garnished with lemon juice, oil and a light sprinkling of dry herbs. Kipper fillets are arguably better then smoked salmon unless very good. With these fried tinned potatoes (no real potatoes yet) Potatoes are for me a treat dish, not a dull every day chaperon. Then Welsh rarebit and hot beetroot. The shop sliced bread is less than great, but all right toasted with good salty New Zealand butter. Fortunately I like a wide variety of those crackly Scandinavian biscuits which are supposed to make you thin.”

But then there’s this:

“Felt a little depressed but was cheered up by supper; spaghetti with a little butter and dried basil (Basil is of course the king of herbs). Then spring cabbage cooked slowly with dill. Boiled onions served with bran, herbs, soya oil and tomatoes, with one egg beaten in. With these a slice or two of cold tinned corned beef.”

He drinks a bottle of Retsina with it.

"For dinner I had an egg poached in hot scrambled egg, then the coley braised with onions and lightly sprinkled with curry powder and served with a little tomato ketchup and mustard powder. (only a fool despises tomato ketchup). Then a heavenly rice pudding. It is fairly easy to make a very good rice pudding but how often do you meet one? I drank half a bottle of Meursault to salute the coley).