Things occasionally get bought, put on a shelf and forgotten about. Pre-Christmas stressed shopping, I'd grabbed this elegant cone-shaped little bottle as something different for non-alcohol drinkers. Sounded deceptively traditional, "Cox's Apple and Plum Cordial"... 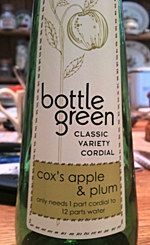 On Christmas morning a last minute challenge was to find a way to make one very small bottle of home-made sloe gin (or was it vodka?) go round ten guests. A much loved book, Cocktails: How to Mix Them was still on top of the piano where it had lived for many years having been passed down through at least three generations. Undated, but with the feel of a war-time utility edition, it is by "'Robert' of the American Bar, Casino Municipal, Nice, and Late of the Embassy Club, London".

Robert had the answer - and we had the ingredients: Sloe Gin Rickey: 1 or 2 lumps of ice, the juice of half a fresh lime, 3/4 gill of Sloe Gin, fill up with cold Soda. Perfect! So was the non-alcoholic version, invented as the doorbell rang with the first guest, 50/50 cranberry juice and ginger ale. It matched exactly the light raspberry-coloured Rickey. We later found the forgotten cordial in the pretty bottle abandoned on the sideboard. We opened it much later. It is absolutely delicious!