This little book, The Reluctant Cook, published in 1953, will delight the heart of every cook, good, bad or indifferent, particularly because of the illustrations by Alex Jardine. Quoting from the dust jacket: "If I can show you how to cook like an angel and only have one saucepan to wash up that would be different, wouldn't it?"

From Some Soups and Salads: 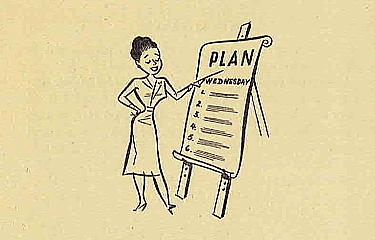 Salad, when served as a separate course after the meat, helps to allay hunger and is therefore a good thing. By this simple expedient you may gain a great reputation for originality and elegance, and effect at the same time a considerable economy in the most expensive types of food.

Salad, like soup, can be anything. If you choose to serve cold rice pudding and stewed prunes, with a garnish of lettuce leaves and a dressing of lemon juice and oil, as a salad, no one could contradict you. I know because I've done it, but you need courage, a knowledge of the inadequacies of your opponent (which is a more potent armour than any courage), and a few green olives and radishes cut into the shape of fuchsias stuck on top. It's a masterpiece, and the finest known method of disposing of cold rice pudding.

It is also unorthodox and cannot be advocated as a standard practice, only as an example of how fortune favours the bold.

From Some Thoughts on Vegetables: 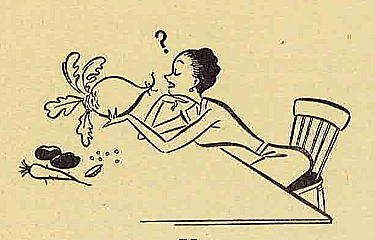 One of the most gruesome memories of meals eaten in any but absolutely first-class English hotels and restaurants is the cabbage.

The odour greets you as you enter and follows you as you leave. The preference among cooks of this sort is for a large white cabbage, which is cut up first thing in the morning and left to 'soak'. It is boiled in enough water to conduct a successful laundry and a pinch of bicarbonate is put in the water — for what reason everyone has forgotten, it is just the way one boils cabbage. Moreover it is stewed so long with the lid on that it turns olive-colour. One then cuts it up and leaves it on the hot-plate until the last one to dine has had his fill of it. And I hope it gives him indigestion. It does me.

The Reluctant Cook by Ethelind Fearon was published in 1953 by Herbert Jenkins Limited.