Part 10 of Helen's excursion through Food in Literature includes extracts from The Magic Mountain by Thomas Mann and extracts from Dinner at the Homesick Restaurant by Anne Tyler.

The Magic Mountain by Thomas Mann

It is set in a sanatorium for TB patients in the German Alps, just before WW1. A feature of the book is its emphasis on food. The patients are rather like latter day cruise ship passengers, who have paid for and are determined on eating five meals a day. Meal times are faithfully observed by all but those patients who are close to death and unable to leave their rooms. Seating arrangements and the social hierarchy by which they are ordered are strictly observed. They are fed huge quantities of rich food and alcohol.

Mynheer Peeperkorn is a gross character with an overpoweringly forceful personality. The other patients are in thrall to Peeperkorn. After one huge dinner, Peeperkorn summons a selection of the guests to join him as his guests and sets about ordering yet more food

‘Platters of cold meat, joint and roast; tongue, goose, ham, sausage, whole dishes of delectables, all garnished with little radishes, butter balls, and parsley, gay as flower beds. They found a welcome, despite the lately consumed supper, which, it were superfluous to tell the reader, had lacked nothing in heartiness.’

Then and for no apparent reason, the host flies into a rage and complains about the feast.

‘He swelled with rage, struck the table with his fist, and cursed the food for garbage, fit for the dust bin.’

‘… cajolingly that they might order something else, a hot dish perhaps, if the chef could be won over.’

He ordered omelettes for himself and the company, for each person a fine large omelette aux fines herbes, to help them do justice to the demands that life made on them. And accompanied the order with a hundred-rand note as a sweetener for the staff. His placidity was fully restored by the appearance of the steaming dishes, with their burden of canary-yellow besprent with green, which dispersed a mild warm fragrance of eggs and butter upon the air. They fell to with Peeperkorn, who ate and presided over the enjoyment, with broken words and compelling gesture enjoining upon everybody a perverted appreciation of these gifts of God. He ordered a Hollands all round to go with the omelettes; the transparent liquor gave out a healthy grain odour, mingled with the faintest whiff of juniper, and Peeperkorn laid upon them all to drink it reverently.

Hans Castorp smoked, Frau Chauchat as well; the latter Russian cigarettes with a mouthpiece, from a lacquered box with a troika going at full speed on the lid.'

Peeperkorn then delivers a long and ridiculous monologue and then:

' “The hour is at hand” said he, and sent for the wine card. He put on a horn rimmed pinz nez, the nose piece of which rose high up on his forehead, and ordered champagne, three bottles of Mumm & Co. Cordon Rouge, extra dry, with petits fours, toothsome, cone shaped little dainties in lace frills, covered with coloured frosting and filled with chocolate and pistache cream. Frau Stohr licked her fingers after them. Herr Albin nonchalantly removed the wire from the first bottle, and let the mushroomed shaped cork pop to the ceiling, elegantly he conformed to the ritual, holding the neck of the bottle wrapped in a serviette as he poured. The noble foam bedewed the cloth. Every glass rang as the guests saluted, then drank the first one empty at a draught, electrifying their digestive organs with the ice-cold, prickling, perfumed liquid. Every eye sparkled … (Peeperkorn) summoned additional supplies: coffee followed the champagne, “Mocha double”, with fresh rounds of “bread”, and pungent liqueurs: apricot, chartreuse, crème de vanilla, and maraschino for the ladies. Later there appeared marinated filets of fish, and beer, lastly tea, both Chinese and camomile, for those who had done with champagne and liqueurs and did not care to return to a sound wine, as Mynheer himself did: he, Frau Chauchat, and Hans Castorp, working back after midnight to a Swiss red wine. Mynheer Peeperkorn, genuinely thirsty, drank down glass after glass of the simple, effervescent drink.'

All the food and drink is of the finest quality, it is prepared with skill and beautifully presented, yet the scene is disgusting. It is disgusting because it is all being consumed in quantities that are so excessive that it can not be appreciated. It is also being eaten and drunk by dying people, so that its basic function, to nourish and support life, is utterly pointless. In fact it is probably contributing to their deaths.

It is one of the best descriptions of obscene gourmandising in literature.

Dinner at the Homesick Restaurant by Anne Tyler 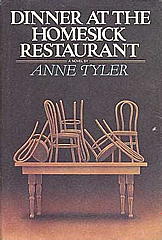 Cody, Ezra and Jenny are the adult children of Pearl Tull. Pearl’s husband and their father walked out on them when they were small and she has brought them up alone in working class Baltimore. She is a domineering woman with a vicious temper and all three children are emotionally handicapped in different ways. The novel tells the story of their childhood and their attempts over the years to remain a family unit and to forgive their mother and come to terms with the past. Their lives take very different paths. Their feelings about her and each other are deeply conflicted and confused.

Ezra reacts by becoming extraordinarily gentle and passive. He loves cooking, works in a local restaurant and is left it by the owner. He never marries, never leaves home and becomes his mother’s carer. He is deeply committed to making the restaurant a refuge, where customers are fed well and made to feel safe, welcome and at home.

‘… he grew feverish with new ideas , and woke in the night longing to share them with someone. Why not a restaurant full of refrigerators, where people came and chose the food they wanted? They could fix it themselves, on a long, stove lining one wall of the dining room. Or maybe he could install a giant fireplace, with a whole steer turning slowly on a spit. You’d slice what you liked onto your plate and sit around on armchairs eating and talking with the guests at large. Then again, maybe he would start serving only street food. Of course! He’d cook what people felt homesick for – tacos like those from vendor’s carts in California, which the Mexican was always pining after; and that wonderful vinegary North Carolina barbecue that Todd Duckett had to have brought by his mother several times a year in cardboard cups. He would call it the homesick restaurant.’

He has difficulty in keeping the existing customers, who think that a restaurant should be somewhere fancy, where you can eat fancy food you could not have at home. Ezra tries to explain his ideas to one of these patrons:

' “It’s not only pot-roast, Ezra said. He sat in a chair. His suit had a way of waffling around him, as if purchased for a much larger man. This is something more, I mean pot-roast is really not the right name; it’s more like… what you long for when you’re sad and everyone’s been wearing you down. See there’s this cook, this real country cook, and pot-roast is the least of what she does. There’s also pan-fried potatoes, black-eyed peas, beaten biscuits genuinely beaten on a stump with the back of an axe…” '

Both Ezra’s siblings have food complexes. Jenny is a borderline anorexic. Cody, who is driven to be a success in business, is not interested in it and associates food and sitting down to a meal with others with memories of his mother:

'Even back in his childhood, when they’d depended on her for nourishment… why, mention that you were hungry and she’d suddenly act rushed and harassed, fretful, out of breath, distracted. He remembered her coming home from work in the evening and tearing irritably around the kitchen. Tins toppled out of the cupboards and fell all over her—pork ‘n’ beans, spam, oily tuna fish, peas canned olive drab. She cooked in her hat, most of the time. She whimpered when she burned things. She burned things you would not imagine it possible to burn and served others half raw, adding jarring extras of her own design such as crushed pineapple in the mashed potatoes. (Anything , so long as it was a left over, might as well be dumped in the pan with anything else). Her only seasonings were salt and pepper. Her only gravy was Campbell’s cream of mushroom soup, undiluted. And till Cody was grown, he had assumed that roast beef had to be stringy—not something you sliced, but a leathery, dry object which you separated with a fork, one strand from the other, and dropped with a clunk upon your plate…

She ate little herself, often toyed with her food; and she implied some criticism of those who acted hungry or over interested in what they were served. Neediness: she disapproved of neediness in people. Whenever there was a family argument she most often chose to start it over dinner.'

Ezra’s numerous attempts to get his family to sit down together and complete a meal in harmony, form a continuous thread in this beautifully written and observed novel.