For the second part, Helen chooses extracts from Just William by Richmal Compton, the poem This is Just To Say by William Carlos Williams and a food-related parody, and another extract from Livia by Laurence Durrell. 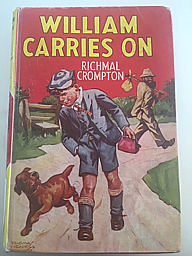 William Brown is one of my fictional heroes, right up there with Mr Darcy, Lord Peter Wimsey and The Scarlet Pimpernel. Intrepid in the face of adversity, scornful of danger and hiding a romantic nature behind his imperturbable features. Martin Jarvis’ readings are excellent and Bonnie Langford’s Violet Elizabeth in the TV series is incomparable, but I think William must be read for Richmal Crompton’s phonetic writing of William’s unique speech and diction and Violet Elizabeth’s lisp.

William and the “Outlaws” are hearty eaters, eternally on the look out for iced buns, doughnuts, liquorice whips and sherbet fountains, all of which are in very short supply because it’s war time. For the most part he regards the female sex with suspicion and disdain but just occasionally he makes an exception to the rule and for the sake of the object of his affections he is ready to slay dragons and brave any danger. My favourite story that features food contains all the best ingredients of a William story. It shows his courtly side and it also concerns the redoubtable Violet Elizabeth Bott, whose steely nature, plus her ability to summon up floods of tears at will, exasperates and usually baffles him.

The story is called “Too Many Cooks” and it’s from William Carries On. A lady comes to live in the village, who is unlike other adults in that she shows a genuine and flattering interest in the Outlaws. She invites them to tea regularly, explaining that she is a cookery writer and wants them to sample her recipes, and she is respectful of and grateful for their opinions. One day she confides in them that she has asked the editor of a women’s magazine to lunch. If she can impress him, he may offer her a regular column. The only problem is that her menu would be greatly enhanced by lemons but she can’t lay her hands on any. The only people who are likely to have them are hoarders and hoarding is a criminal act. When William goes home he asks his mother if she has any.

“Lemons?” says Mrs Brown, as if she could hardly believe her ears. “There’s a picture of 'em in the 'cyclopedia” said William helpfully.

“I don’t think I even want to remember what they look like,” said Mrs Brown bitterly. “No I’ve not seen one for weeks.” …

Later on William goes for a walk and bumps into Violet Elizabeth.

“Ith nith to thee you William” she said, turning on the famous charm but William was, as ever, proof against it.

“It's not nice to see you”, he countered with regrettable discourtesy. “Get out of my way, I’m busy.”

“Im buthy, too” said Violet Elizabeth “leth be buthy together.”

William is forced to tell her that he’s looking for lemons and Violet Elizabeth blithely announces that:

“… motherth got thome. Thee’s got a bocth full. Thee’th had it in the bottom of her wardrobe for months and months.”

William judges her to be a hoarder who should be in prison. Violet Elizabeth accepts this prospect with serenity, as it would allow her to stay up as late as she wanted, although she has second thoughts, as her mother is the source of her beloved “athid dropths”. However he persuades her to steal the lemons, which she duly does, handing over a box, containing six of them, each in a separate compartment. The plan is to replace the lemons with apples, which William does.

At this point his instinct for theatrics takes over and instead of handing the lemons to his friend, he decides to surprise her. He steals into her kitchen and lifting the lid off a saucepan of soup, he drops one in. Then he prises the lid off an apple pie and drops another one into the dish.

The lemons are of course soap. (remember the Bromley lemon soaps that used to be sold, perfectly formed, nestling in tissue paper shavings in compartmentalized wooden boxes?)

The meal is a disaster and because the cookery writer is too nervous to partake of the soup or the pudding, she can’t understand why her guest is in such discomfort and rejects both, after taking a single spoonful and blenching.

Eventually the plot unravels. Violet Elizabeth and her mother turn up and Mrs Bott presents the already terribly upset cookery writer with the box, as a thank you for a talk she had delivered to WI. When it’s opened, it’s found to contain six apple cores. William had not been able to not resist taking large bites out of them. Violet Elizabeth is highly indignant.

“It muth be William Brown,” she says “He’th eaten them. The greedy boy. … There were thix of them. Thix lovely appleth an’ he’th eaten them all.”

Fortunately, the editor is amused, the cookery writer gets her column and William gets half a crown.

“Coo!” murmured William ecstatically “Half a Crown! I’d almost forgotten what they looked like.”

PS on the subject of sweets from that era, here’s another extract from Livia by Lawrence Durrell. A schoolmaster is watching some boys during break and marvelling at:

“… the unchanging habits of school boys throughout the years. Their habit of buying a tin of condensed milk and punching a hole in it — the sweetened version. This they would suck like monkeys all day long. The older Victorian version of sweets were still on the market — like the Sherbet Dab, which made you dream you were in bed with the Queen of Sheba. It was rather expensive. Other boys bought an orange and screwed a sugar lump into its skin. This wound could also be sucked with pleasure. Most magical of all was the Gob Stopper, almost the size of a golf ball, which shed successive coats of colour as one sucked.”

This is Just to Say by William Carlos Williams

This short poem has been much parodied. You may agree that it’s easy to see why.

Many of the parodies use food, with sarcastic apologies for having eaten the Doritos, the Maltesers, or the remnants of last night's Indian takeaway etc., but this one, by Erica-Lynn Gambino, sums up how I would like to have replied;

More from Livia by Laurence Durrell 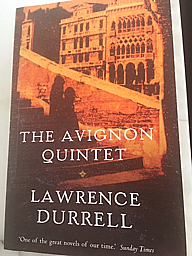 There is a description of a huge banquet given in Avignon by Lord Galen, a shadowy multi millionaire, for Prince Hassad, a supposed member of the Egyptian Royal family. The two are engaged in a couple of enormous, amoral projects. First, they plan to travel to Germany to do an arms deal with the Krupp brothers. This is at a time when Hitler has become Chancellor and a second world war seems inevitable. Second, they intend to persuade the British and French Governments to defray part of the cost of launching a hugely expensive quest for the shipwrecked and lost treasure of King John, which some historians believe to be lying at the bottom of The Wash.

The Prince travels with a large retinue, including his personal food taster, followed by a removal van that had dazzled the French customs:

“… all the Prince’s boxes were made of rare wood and covered outside with coloured silk and inlaid with metal filigree. There was a royal coffin worthy of Tutankhamun. Expensive bridge tables. Enough plate and cutlery to give a banquet for thirty people. When later he showed them these wonders, which included four of his favourite hawks in case he might be in the mood for hawking, he was good enough to explain that what might seem rather superfluous to them was really very necessary for an Egyptian prince, because one never knew.”

However, the menu for the banquet, which is set out in an appendix, was as follows: